skip to main | skip to sidebar

Voices of the Trees 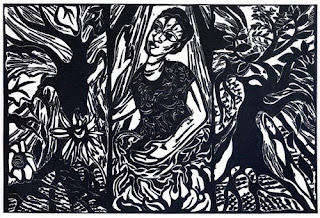 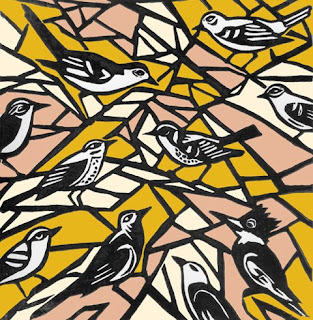 Of course, from a distance, people can appear generic. Yet get a little closer (and if we could get really close, we could observe another's inner world), and our individuality and personhood is startlingly. These birds were carved in this spirit.
The linocut is 7 by 7 inches and splashed with Photoshop colors—something I resort to when black and white just doesn't seem enough! Thanks for stopping by! : )
Posted by Nicola at 12/06/2008 13 comments:

From Vacant to Occupied 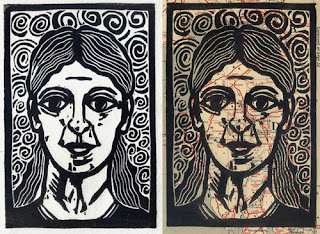 A topic like "vacant" reminds me of clutter clearing (via feng shui or vastu) and the principle of clearing out to allow new ideas and energies in.
And so it can be in mental life: "emptiness" as something beautiful, a vacancy just prior to a flood of new movement and life.
So here is my 5 by 7 linocut, handprinted both on "empty" and "lively" paper. Actually, the "lively" paper is from a 1961 AA handbook with perfect-sized maps for explorative printmaking! Have a great week! :)
Posted by Nicola at 11/03/2008 6 comments: 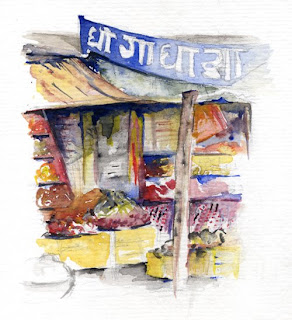 India's beautiful stalls and kiosks!
This is a 4 by 4 inch watercolor, painted with a very old, but faithful, set of paints. Thanks for stopping by! : )
Posted by Nicola at 9/28/2008 10 comments: 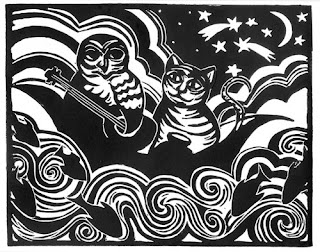 Here we have two loved ones "at one" with each other. Hopefully their oneness will fructify; hopefully they will deeply respect their inevitable differences.

This is an 7 by 9 inch linocut, hand printed printed today. It was carved mostly outdoors, in the warmth of a farmer's market. Thanks for stopping by! :)
Posted by Nicola at 9/21/2008 7 comments: 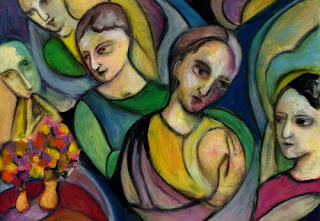 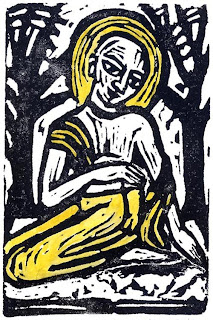 Even today, in certain parts of the world, it is still possible to come across true wandering mendicants, detached from home and comforts. My above portrait is Rupa Goswami, a 16th century renunciate, devotional poet, and philosopher who lived in the land of Vrndavana, India. This is a 4 by 6 inch linocut. Thanks for stopping by!
Posted by Nicola at 8/16/2008 17 comments: 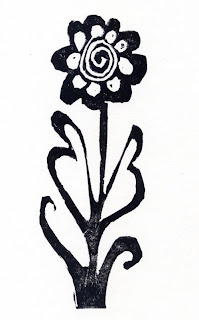 Although there is no poem here, a simple block print, printed with a barren, feels the closest thing to haiku. Carved and printed today. :)
Posted by Nicola at 8/14/2008

"In a beautiful pea-green boat..." 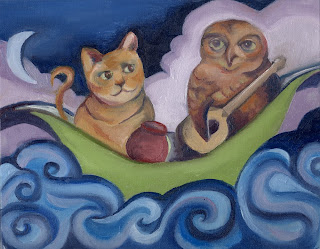 Edward Lear's famous nonsense poem is one of the first poems I can remember. Words like "Bong-Tree" and "runcible spoons" left indelible marks in my memory!

Poof! And again become a mouse! 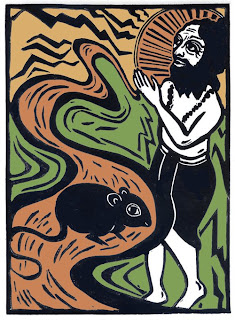 There are a few "again become a mouse" stories. Here is this one from the Panchatantra: one day a sage was meditating in a holy river. Suddenly a mouse fell into his praying hands; a hawk above accidentally dropped the little thing. Now the sage's wife had always wanted a daughter, and the sage decided to change the mouse into a baby girl. His wife was delighted, and they all spent many joyous years together. When it came time to find their daughter a husband, the sage and his wife wanted only the best. First they approached the sun, yet their daughter refused to marry the sun for he was too hot. They then approached the wind, but she refused to marry him too. Finally, they approached the mountain, but she complained he was too dull. At this point the sage was desperate; so he asked the mountain what to do. The mountain considered the matter deeply, and, after some thought, recommended the lively mouse as a good match. The sage called for the king of mice, and the sage's daughter was delighted! Convinced this was her husband-to-be, she begged her father to change her into a mouse, which he did. The moral? Let a mouse be a mouse!
This is a 6 by 8 inch linocut, with color splashed on from Photoshop. Have a great week!
Posted by Nicola at 8/04/2008 12 comments: 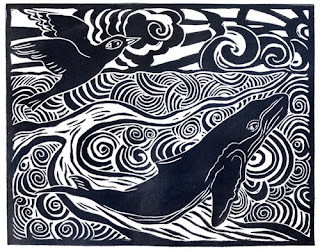 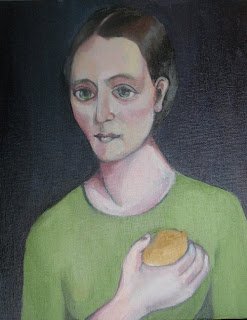 I've been intrigued with primitive/ naive portraits ever since I found paintings by naive artists as a teenager hunting through bookstores. So "Young Woman with Lemon" is a perfect opportunity to explore my intrigue! Painted today, 8 by 10 inch oil on canvas. Thanks for stopping by!!! : )
Posted by Nicola at 7/06/2008 8 comments:

Moral Punchlines: “Without courage to face the unknown, no gain can be achieved.” 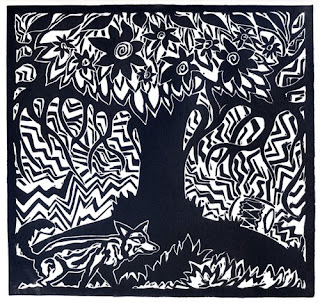 From the Panchatantra, ancient India's animal tales with moral punchlines: One day Jackal was wandering the forest, searching for food. Suddenly he heard a booming noise growing louder and louder. Jackal shivered and crouched down into a hole in the forest floor. After hours of worrying, Jackal got up thoughtfully; after all, no one was around. "Let me be brave and see for myself what is making this eerie noise," he said. Peering over a large bush, Jackal laughed uncontrollably. What he saw was a banyan tree whipping the remains of an abandoned war drum. And near the drum lay a pile of delicious food. Jackal chuckled, "If I hadn't overcome my fear, I would have missed this marvelous dinner!"
An 8 by 8 inch linocut, carved and printed today. Thanks for stopping by! :)
Posted by Nicola at 6/16/2008 9 comments: 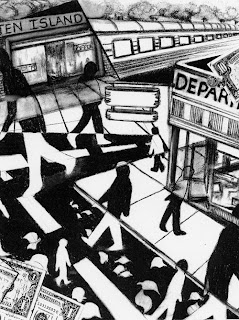 In this mixed media piece (13 x 15 inches), the dreaming figure is anguished; he is worrying he won't have enough money and is frantically searching the city for more. Fortunately, when we wake up from a worrying dream, we can contemplate other perspectives and even find deep solace from wise souls. Thanks for stopping by! : )
Posted by Nicola at 5/26/2008 7 comments:

"The World is Broad and Wide" 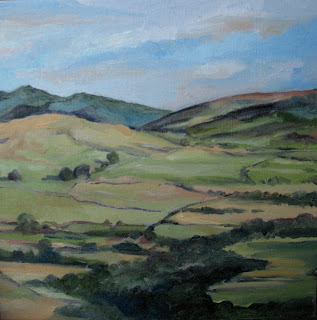 "Be patient, for the world is broad and wide." William Shakespeare
My "patchwork" landscape was painted in oils on an 8 by 8 inch canvas. Thanks for visiting! : )
Posted by Nicola at 5/19/2008 13 comments:

Threading an Elephant through the Eye of a Needle 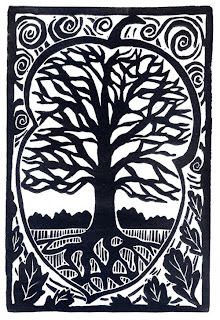 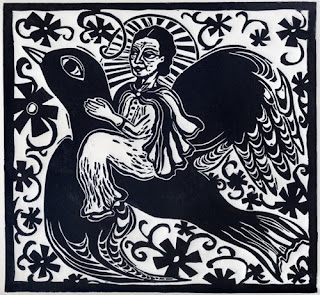 The Mexican tale of a wise woman is the inspiration for my piece: she drew a bird on a cell wall (while she was wrongly imprisoned), climbed on the "bird," and then flew away. :)
Posted by Nicola at 4/27/2008 7 comments:

With Primitive Portraits in Mind 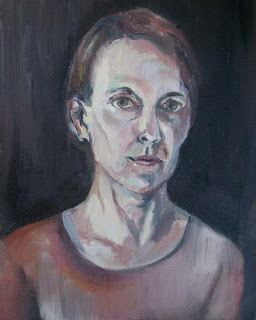 I am intrigued by naive/ primitive portraits and their (often) pensive expressions against dark backgrounds. With that in mind, I painted my piece on a 8 by 10 inch panel today, with folk art being my starting point.  : )
Posted by Nicola at 4/20/2008 12 comments:

Illustration Friday: Save our Planet 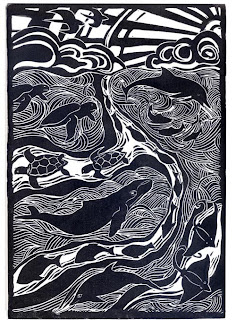 I recently heard an interesting biological observation: up to 100 species go extinct on our planet daily. This is mainly due to tropical deforestation but also affects other geographical areas. Here is my offering to all the wonderful creatures of the ocean, an 8.5 by 12 inch linocut.
Posted by Nicola at 4/06/2008 10 comments: 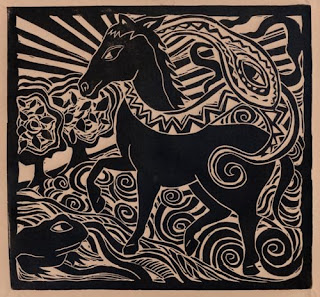 Toad is irritable and here is the story. One day Toad spots Snake riding his horse. Snake isn't the most graceful of riders; after all, he is a snake, and he can't sit up straight for long or use two hands. So Toad gives Snake some hints. He even demonstrates personally just how to ride like an expert. After quite a show, Snake gets back on his horse. But Snake shows no improvement. At this point, Toad loses it. He curses and gripes, "What a stupid snake you are! If you can't ride as I have shown you, you might as well not ride at all!" But Snake trots off, oblivious to Toad's tirade, murmuring to himself, "That may be, but the point is, I am the owner of this horse, not you." This African folk tale is the inspiration for my piece "Peevish Toad," an 8 by 8 inch linocut.
Posted by Nicola at 3/23/2008 8 comments:

Here is Gajendra the elephant. He is not only in a heavy body; he is in a heavy situation. The crocodile on the bottom right, being a creature of the water, is gradually overpowering Gajendra. Realizing his weak position, Gajendra offers eloquent prayers, and a lotus flower, to Lord Vishnu. This wonderful story is recorded in the Srimad Bhagavatam, the ancient text filled with melodious Sanskrit poetry and hymns. "Gajendra the Elephant" is an 11 by 11 inch linocut, printed on 80 lb Strathmore paper. Have a great week! 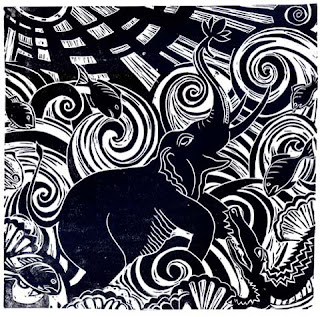 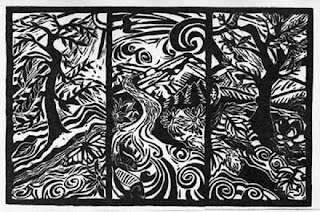 This week's "Illustration Friday" topic is "Garden." My linocut "Morning Symphony" reminds me of treks up the Drakensburg and the expansive, never-ending gardens of those African mountains. This print is 11 x 17 inches and is available at my Etsy store. Thank you for stopping by!
Posted by Nicola at 3/12/2008 6 comments: 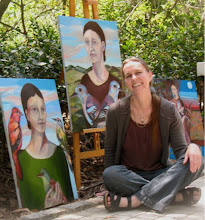